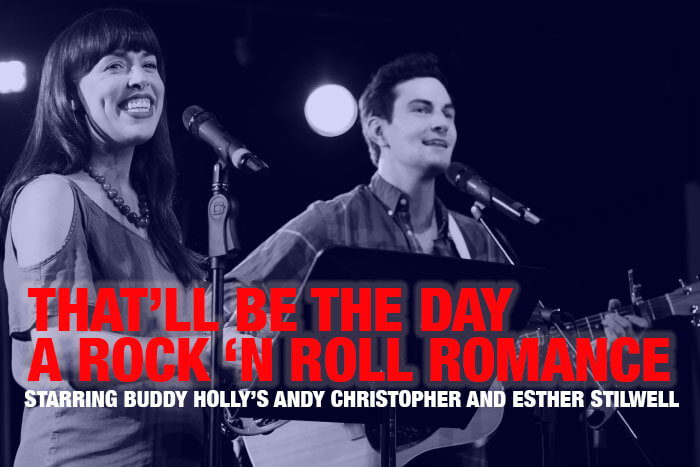 Featuring the music of Buddy Holly, Adele, Hank Williams, The Beatles, Elvis, and more! – Join real-life couple Andy Christopher and Esther Stilwell (Buddy: The Buddy Holly Story) as they share songs and tales from their musical theatre careers as well as their time falling in love while performing together in Buddy.

Andy Christopher is thrilled to be back at Bucks County Playhouse where he portrayed Buddy Holly in the 2019 production of Buddy: The Buddy Holly Story. Other favorite regional credits include: Once (Pittsburgh Civic Light Opera), Woody Sez (Ivoryton Playhouse), Hank Williams: Lost Highway (Flat Rock Playhouse and West Virginia Public Theatre), Buddy: The Buddy Holly Story (many, many, many places). TV: “That Damn Michael Che” and “Bands”. For Esther and our two beautiful daughters, Haven & Mercy. Ps100.2. www.andychristopher.net

Esther Stilwell is delighted to be making her Bucks County Playhouse debut! On Broadway she covered 6 female roles in the cast of Priscilla, Queen of the Desert, with whom she performed on the 65th Tony Awards®. 1st Nat’l Tour of Spamalot as Lady of the Lake opposite 6 kings, including Richard Chamberlain. 25th Anniversary Nat’l Tour of Cats as Grizabella. Favorite regional credits include: Once (Girl, Pittsburgh Civic Light Opera), Man of La Mancha (Aldonza, Merry Go Round Theatre), All Shook Up (Miss Sandra, Arvada), Buddy: The Buddy Holly Story (Maria Elena, Fulton & Maine State Music Theatre). She holds a BFA in musical theatre performance from The University of Oklahoma and trained in Shakespeare performance at the Royal Academy of Dramatic Arts in London. Favorite roles of all: partner to Andy and mama to Haven & Mercy!