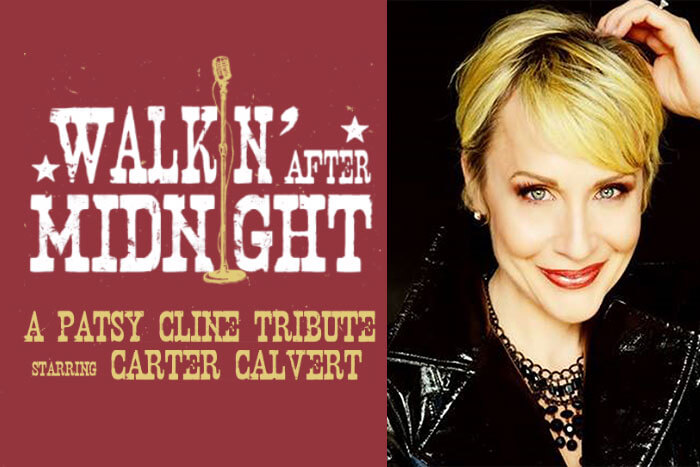 “Carter Calvert effervesces: her voice echoes chimes in the night …”

“Her voice truly is a siren and she has a range like no other.”

Backed by the Roger Cohen  Band

Through a colorful tapestry of iconic songs and witty personal storytelling, Carter Calvert uses her own award-winning vocal talents to create this captivating musical tribute. Miss Calvert, a Broadway star and title character in Always…Patsy Cline (opposite Emmy Award winner Sally Struthers), has gained rave reviews and triumphant accolades for her heartfelt portrayal of this legendary country recording artist. She vocally captures Patsy Cline’s musical stylings pitch- perfectly in mega hits including “Crazy,” “I Fall To Pieces,” “She’s Got You” and “Walkin’ After Midnight.” Both captivating and endearing, this fast-paced entertainment delights audiences of all ages!

Carter Calvert is best known for originating her role in the Tony®-nominated Broadway musical It Ain’t Nothin’ But The Blues alongside Grammy® winning jazz vocalist Gregory Porter. The New York Times wrote, “Carter Calvert effervesces: her voice echoes chimes in the night” and “Her smoldering grip on “Fever” is positively dangerous”.

She is featured on the cast recording and starred in the show’s national tour. Other tours include the title role in Always … Patsy Cline opposite Sally Struthers, the featured role of ‘Grizabella’ in the Broadway National touring company of CATS, the European tour of Smokey Joe’s Café, and an international tour of Neil Berg’s 100 Years of Broadway. She’s received raves for her off-Broadway work in Forbidden Broadway: Comes Out Swinging and appeared in The Thing About Men opposite Tony nominee Marc Kudisch. She has originated World Premiere roles in the musicals Forbidden Vegas, Sparkley Clean Funeral Singers and The Great American Trailer Park Musical. Other favorites include Annie in Annie Get Your Gun and Eva Peron in Evita.

Carter has opened for iconic performers including Liza Minnelli, Marilyn McCoo, Chubby Checker and The Temptations. Her television credits include “The David Letterman Show,” “The Rosie O’Donnell Show,” and “The Today Show.” She is an accomplished actress, as well as a popular voice-over artist. She’s been featured in numerous national television and radio commercials. While still in high school, Downbeat Magazine named Carter “Best Female Jazz Vocalist” and Starsong Records hailed her as “Best Female Vocalist of the Year.”

Ms. Calvert has been touring the globe as a headliner on the prestigious Crystal Cruise line as well headlining in clubs and theaters across the country with her solo shows, Viva La Diva!: A Musical Celebration of the Divas of Broadway, Pop,R&B & Country, Natural Woman: A Carole King Celebration & Walkin’ After Midnight: A Tribute to Patsy Cline. As a recording artist, Carter Calvert and the Roger Cohen Trio debuted at number 13 on the CMJ jazz charts (beating out Paul McCartney!). Her latest CD “It’s A Man’s World” debuted in the top 10, received rave reviews and extensive radio play. It is available for download on iTunes. Carter is proud mother of her beautiful 15-year-old daughter, Ella, and devoted wife to her handsomely talented drummer-husband, Roger Cohen. www.cartercalvert.com

For performances after September 5, 2021: