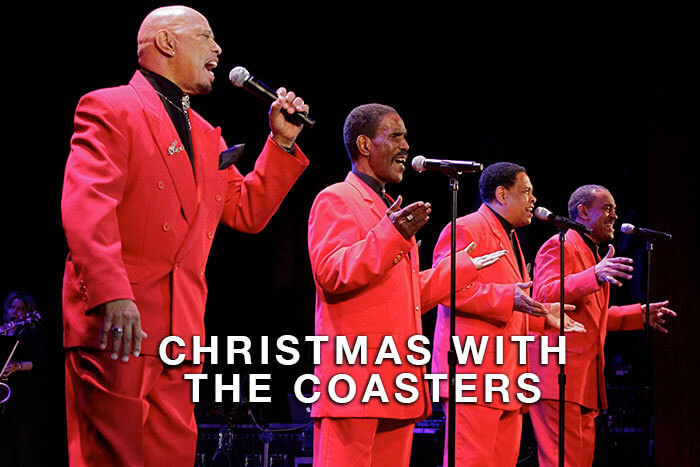 Christmas with The Coasters

Join The Coasters, one of the most celebrated vocal groups of all time, for a celebration of the holiday season. The concert will feature selections from their holiday CD, “Christmas with the Coasters” (songs ranging from “What Christmas Means to Me” to “Silent Night” and more) as well as some of their top hits (including chart toppers like “Yakety Yak,” “Poison Ivy” and “Searching”).

It has been reported that the renowned song writing team of Leiber and Stoller found a relationship with the ensemble that was   near magic. The hits just kept coming and became a major portion of the musical score for Smokey Joe’s Café that was retrospective of Leiber and Stoller. It received a Grammy and seven Tony Award nominations.

The Coasters had eight songs in that show including then hit title song itself.  They recently toured more than 40 Performing Arts venues around the country in the highly acclaimed revival of “Smokey Joe’s Cafe.”  With The Coasters winning full audience standing ovations each night before singing their first note.

The Coasters songs are unique — infused with humor and a special wink that always lets their audience in on the fun.  Their first hit, “Down In Mexico,”  was followed by “Young Blood” and “Searchin” — with both selling a million copies each.  The Coasters road to success has been paved with gold  with more block buster hits such as “Yakety Yak”, “Charlie Brown”, “Along Came Jones” “Poison Ivy”, “Little Egypt”, “Love Potion No.9″,”Zing Went The Strings Of My Heart”, “Baby That’s Rock & Roll:”…   and so much more.