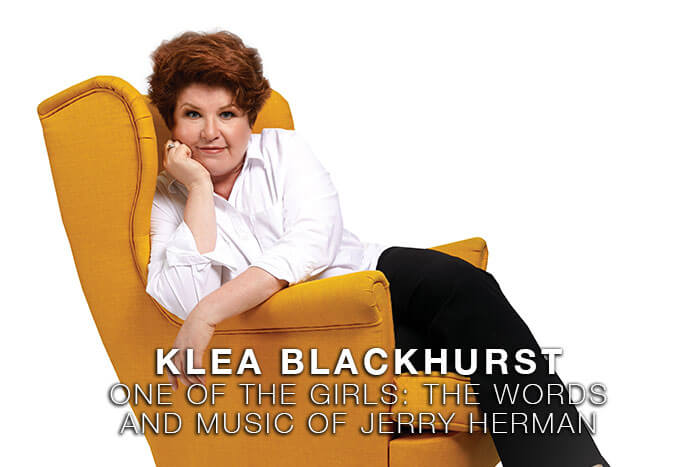 “Blackhurst gave one of the most stirring shows of her already much-lauded career … (she has) a big, power voice, with the kind of energy that cannot be denied and must be expressed. ”

“One of the Girls:
The Words and Music of Jerry Herman”

“When Klea Blackhurst sings one of my songs, you know exactly what I wanted my music and lyrics to say … I’m one of her biggest fans!” — Jerry Herman

Acclaimed actress, singer, and comedienne, Klea Blackhurst has been hailed as one of the top interpreters of the works of legendary composer, Jerry Herman. She brings her Broadway tune filled tribute, ONE OF THE GIRLS: The Worlds and Lyrics of Jerry Herman, to Bucks County Playhouse for one special performance on Saturday, December 4 at 8:00 pm.

From “Hello, Dolly” to “Mame” to “Mack and Mabel,” Jerry Herman created some of the stages most titanic female characters. Blackhurst became one of “Jerry’s Girls” when she starred in the 50th Anniversary Production of Hello, Dolly! at Goodspeed Opera House. She caught the composer’s attention when he heard Klea sing one of the cut Hello, Dolly! songs written for Ethel Merman, and he immediately invited her to sing his songs across the country and around the globe— including with the London Philharmonic at the Palladium. Blackhurst’s “ONE OF THE GIRLS” pays loving tribute to Jerry Herman and the powerful, loving, and memorable women (both real and on stage) in his life. Expect some of Herman’s biggest hits like “It’s Today” and “Open A New Window” from “Mame”, “Before the Parade Passes By” from “Hello, Dolly!” and “I Am What I Am” from “La Cage Aux Folles.”

Directed by Mark Waldrop. With Musical Direction by Michael Rice.

Klea Blackhurst has received accolades for her award-winning tribute to Ethel Merman, Everything the Traffic Will Allow. Her other acclaimed shows are Autumn in New York: Vernon Duke’s Broadway and Dreaming of a Song: The Music of Hoagy Carmichael, with Billy Stritch, and A Swinging Birdland Christmas (10 years) with Billy Stritch and Jim Caruso.

Klea starred in The Goodspeed Opera House’s 50th anniversary production of Hello, Dolly! Previously she starred in the premiere of the Marvin Hamlisch/Rupert Holmes musical, The Nutty Professor, directed by Jerry Lewis, in Nashville. Her other regional credits include Rose in Gypsy at the Drury Lane Theatre in Chicago, Call Me Madam at 42nd Street Moon in San Francisco, and Annie Get Your Gun at Glimmerglass Opera. Klea’s radio and television credits include “Onion News Network,” “Sesame Street” and “A Prairie Home Companion.”  Her other New York theater credits include A Tree Grows in Brooklyn, Bingo, Radio Gals, Oil City Symphony and Happy Hunting for “Musicals in Mufti.” She has performed at 14 Mabel Mercer Foundation cabaret conventions, and she has also appeared at the Royal Albert Hall, London Palladium, Kennedy Center, Jazz at Lincoln Center and Carnegie Hall.

For a more on Klea, visit https://www.kleablackhurst.com/