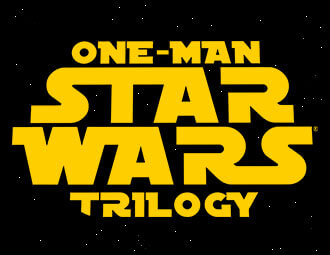 Charles Ross Condenses The Plots Of The
Three Films In One Hilarious Production!
February 11 – 15

Written and Performed by Charles Ross
Directed by TJ Dawe

From the producer of Evil Dead! The Musical and Potted Potter! Starvox Entertainment presents One-Man-Star Wars Trilogy. Charles Ross will stun and amaze you with his fun, energetic and extremely entertaining performance of One-Man Star Wars Trilogy. Officially endorsed by Lucasfilm, One-Man Star Wars Trilogy has been performed for over a million “Star Wars” fans from London’s West End, Off-Broadway, Dubai and the Sydney Opera House! The result of Charles Ross’ “mispent” youth is the creation of his hilarious One-Man Star Wars Trilogy show, where Ross single-handedly plays all the characters with spot-on voice impressions, sings the music, flies the ships, fights the battles and condenses the plots of the three films into one hilarious production. Suitable for “Star Wars” fans from ages 6 to Yoda!

“A one-man reenactment of ‘Star Wars’ is nerdier-and funnier-than you can possibly imagine!” -SPIN