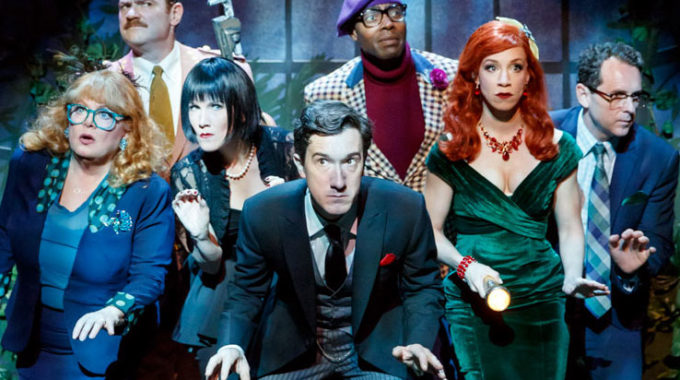 Clue: On Stage, world-premiering through May 20 at the Bucks County Playhouse, is doing great business – and on Tuesday came the announcement that it will start a big North American tour in fall 2018.

Based on the board game and the 1985 film both named Clue, the play set a record on May 10 when it sold more tickets than any other single show in one day in BCP’s history. “Audiences who don’t know the film or the game seem to enjoy it as much as those who do,” said Alexander Fraser, producing director at BCP.

The cast, set, and schedule for the tour are not yet set. “The idea is to do the best play you can do when it world-premieres,” Fraser says. “You’ll always learn something, then take what you learned and perfect it for the road.” Hunter Foster directs Clue: On Stage at BCP and, with Eric Price, adapted the Jonathan Lynn script for the movie. “Throughout this run, Hunter has been rewriting at night for the next day’s rehearsal,” Fraser says. “Doing farce is sometimes the hardest of all.”

Both the play and the national tour are the result of almost two years’ planning. The announcement was made by producers Work Light Productions (RENT, Mamma Mia!, Motown The Musical) and The Araca Group (Urinetown, Wicked), in association with Aged in Wood and Michael Barra.

Sally Struthers and company are fast, furious, funny in ‘Clue: On Stage’ at Bucks County…