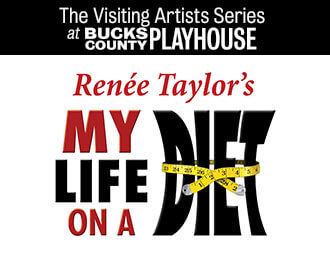 By Renée Taylor and Joseph Bologna

In My Life on a Diet, Academy Award-nominated and Emmy Award-winning writer and actress Renée Taylor looks back on a life full of memorable roles in Hollywood and on Broadway, and just as many fad diets. A self-described “diet junkie” who used to think that if she ate like a star, she’d just might look and live like one, Renée dishes out both juicy anecdotes about and weight loss tips from Hollywood legends such as Joan Crawford, Marilyn Monroe and Barbra Streisand. She also shares hilarious and poignant stories about Joseph Bologna, her partner in work and life for 52 years. In telling about her high and lows–on and off the scale–this comedy legend proves the ability to laugh gets you through it all.

My Life on a Diet is written by Ms. Taylor and Joseph Bologna, and was originally directed by Mr. Bologna. My Life on a Diet made its New York premiere last summer with a critically acclaimed, extended run Off-Broadway at the Theatre at St. Clements. In November, Ms. Taylor won the annual United Solo Special Award for My Life on a Diet for her significant contributions to solo theatre during the year.

“Astonishingly funny. I probably laughed harder, longer and more often
at this show than I have at all the comedies of this new century.”
-Broadway Radio, Peter Filichia

Emmy Award-winning writer and actress Renée Taylor looks back on a life full of memorable roles in Hollywood and on Broadway, and just as many fad diets!
Buy Tickets!
© 2017 Bucks County Playhouse, New Hope, PA 18938
Back To Top
×