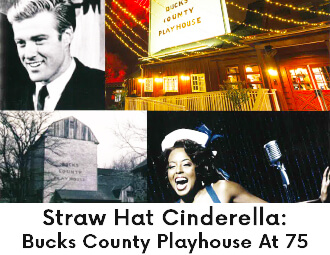 A Short Documentary Narrated by Actor/Director Marsha Mason on the History of Bucks County Playhouse . . . Get an exclusive behind-the-scenes look of Bucks County’s most iconic theater!

Cool off from the summer sun in a dark air-conditioned theater while enjoying a FREE 25 minute documentary about the Playhouse’s unique history. Made in 2014 in honor of the Playhouse’s 75th anniversary, this short documentary takes the audience on a journey through time from the Playhouse’s beginnings as a Grist Mill and later as a summer stock theater to its 2012 renovation and re-opening. The behind-the-scenes look features interviews from Producing Director Alexander Fraser with narration by actor and director Marsha Mason.

Please note: Children under the age of 4 are not permitted into the theater.
Please note: This film will be shown in the theater at Bucks County Playhouse (70 S. Main St., New Hope, PA).

This documentary is based on the James A. Michener Art Museum’s exhibition,
featuring actor/director Marsha Mason and curator David Leopold.