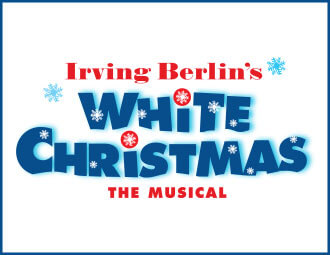 Single tickets are on sale soon, BUT
PURCHASE A SEASON TICKET PACKAGE TODAY & GET AN EXCLUSIVE SUBSCRIBER DISCOUNT TO THIS SHOW! CLICK HERE

Book by David Ives and Paul Blake • Music and Lyrics by Irving Berlin
Based upon the Paramount Pictures film written for the screen by
Norman Krasna, Norman Panama and Melvin Frank

Based on the beloved Christmastime movie musical, White Christmas includes all of Irving Berlin’s classic songs, from “Count Your Blessings Instead of Sheep” and “Sisters” to “Mandy” and, of course, the cherished title song, “White Christmas.”

When two talented song-and-dance men, Bob Wallace and Phil Davis, team up after the war to become one of the hottest acts in show business and eventually decide to follow their love interests, Betty and Judy Haynes, and their sister act all the way north to snowy Vermont, a wintry and romantic musical comedy ensues.

Upon arrival at the foursome’s destination, a quaint Vermont Inn, Wallace and Davis run into their former World War II army commander, now owner of the Inn, General Waverly, who they learn is in financial trouble. So, in an effort to help their wartime General, Wallace, Davis and the Haynes sisters plan a yuletide miracle, a fun-filled musical extravaganza that’s sure to put Waverly and his business in the black!