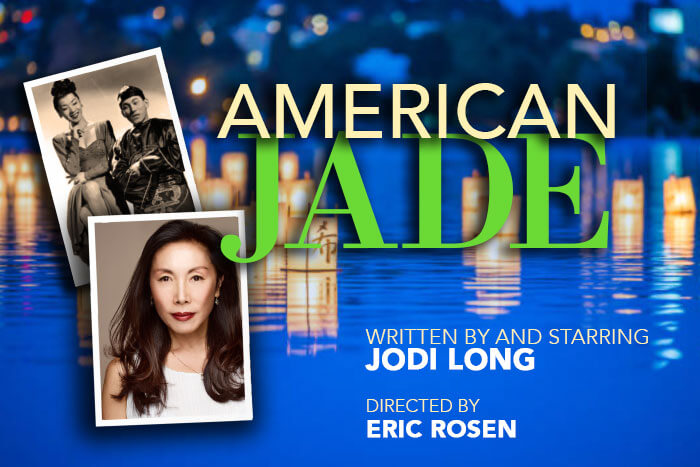 “Remarkable and enthralling . . . just the right measure of humor, charm, and passion.”

PROOF OF VACCINATION NO LONGER REQUIRED

Following the lead of the Broadway League, which represents all the Broadway houses and hundreds of theaters across the country, Bucks County Playhouse has revised its Covid-19 protocols for patrons to reflect their new standard. As of the opening of our summer season on May 20, proof of vaccination will no longer be required for entry. For the near future, all patrons will still be required to wear a face covering when inside the Playhouse.  As conditions continue to change, the Playhouse will continue to update its protocols throughout the season. Please continue to check our website and social media channels for updates.

Written by and Starring Jodi Long

The first Asian-American actor to win an Emmy, Jodi Long breaks barriers even as she follows in her family’s footsteps. Jodi’s Chinese-Australian, tap-dancing father and Japanese American mother were a popular nightclub act in the 1940s and ‘50s on the Chop Suey Circuit and were invited to appear on “The Ed Sullivan Show.” “American Jade” brings her entire family’s story to life! With humor and a little song and dance, Jodi leads us on a vaudeville journey into the past, discovering the imprints that family leaves on us all.

Emmy winning actress for her role as Mrs. Basil E in Netflix’s Dash and Lily, Jodi is a veteran of stage, film and television. She made her Broadway debut at age 7 in Nowhere To Go But Up directed by Sidney Lumet, the first of five Broadway shows she would go on to appear in as an adult: Loose Ends with Kevin Kline, The Bacchae with Irene Papas, Stephen Sondheim’s Getting Away with Murder and the revival of Rodgers and Hammerstein’s Flower Drum Song, for which she won an Ovation Award at The Mark Taper Forum in Los Angeles.

Television series: Dash and Lily, “Okcha” in TBS’s Sullivan and Son, AMC’s Falling Water, Margaret Cho’s mother in All American Girl, Cafe Americain with Valerie Bertinelli, and Miss Match with Alicia Silverstone. And yes, Jodi is Patty “the power lesbian”, in that episode of Sex in The City .

In 2019 Jodi’s one woman play, Surfing DNA, was produced at NJ Rep and was named top ten NJ theater performances. In 2006 at East West Players in Los Angeles.  Jodi wrote and co-produced a documentary about her vaudevillian parents, Long Story Short directed by Christine Choy that played film festivals all over, winning numerous awards including Best Documentary and the Audience Award at the Los Angeles Asian Pacific Film Festival.  Long Story Short was voted one of the top ten documentaries by UCLA’s Asia Institute.