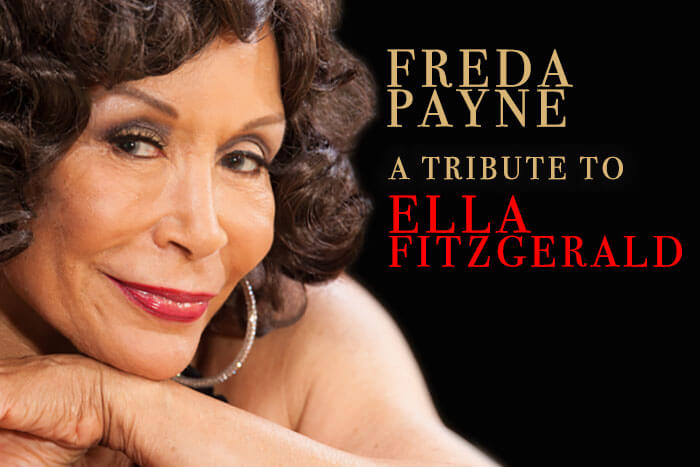 “Payne conjures the spirit of Ella… she’s off the charts with Ella-tonian fever. Payne rocketed the crowd up into Ella’s galaxy.“

“Payne bears a remarkable resemblance to the legendary singer’s sound, and has mastered the wordless scatting style developed by Ella.”

Freda Payne, celebrated R&B and jazz vocalist, who shot to fame with her #1 Hit, “Band of Gold,” and “Bring the Boys Home,” pays tribute to the legendary Ella Fitzgerald, as no one else can! Payne, the star of such Broadway shows as Jelly’s Last Jam, Sophisticated Ladies and Blues in the Night, “recreates the spirit of Ella” with her renditions of “A Tisket, a-Tasket,” “Sweet Georgia Brown,” “It Don’t Mean A Thing.” and “Mack the Knife,” as well as many other Fitzgerald classics.

Freda Charcilia Payne (born September 19, 1942) is an American singer and actress. Payne is best known for her career in music during the mid–1960s through the mid–1980s. Her most notable record is her 1970 hit single, “Band of Gold“. Payne was also an actress in musicals and film, as well as the host of a TV talk show. Payne is the older sister of Scherrie Payne, a former singer with the American vocal group The Supremes.

In 1956, while at Hutchins Middle School, Payne appeared on the nationally televised Ted Mack’s The Original Amateur Hour; singing jingles, she was featured on WJR radio’s Make Way for Youth, in addition to many other local television and radio shows. When she graduated from high school, Payne began touring with Pearl Bailey’s musical review and sang with the Duke Ellington Band. Payne’s first album was After the Lights Go Down for ABC’s Impulse Records in 1962.

Moving to New York City in 1963, Payne made appearances on The Tonight Show with Johnny Carson, The Merv Griffin Show and The Dick Cavette Show. In 1964, Payne joined the Four Tops, Billy Eckstine, and Nipsey Russell on the Quincy Jones Tour. Payne was understudy for Leslie Uggams in Broadway’s Hallelujah Baby! in 1967; she also performed in the Equity Theatre production of Lost in the Stars. Stardom for Payne began when she signed with Invictus Records, a label run by her old Detroit friends Brian Holland, Edward Holland, Jr., and Lamont Dozier (formerly of Motown) in 1969. Payne’s smash single Band of Gold, released in 1970, was ranked #1 in the United Kingdom and #3 in the United States; it was her first gold record. Payne’s other hits included Deeper and Deeper, You Brought Me Joy, and the anti-war, Bring the Boys Home.

As her star kept rising, Payne began appearing in television specials and touring the United Kingdom, Germany, and Japan. Although she left Invictus in 1973, date Payne continued recording, pressing twenty-one albums, including several remakes of Band of Gold. In 1974, Payne made the cover of Jet magazine after she was dubbed a Dame of Malta, by the Knights of Malta and the Sovereign Military, and Hospital Order of St. John of Jerusalem by the Prince of Rumania. Payne hosted Today’s Black Woman, a talk show, in 1980 and 1981, before joining the cast of Duke Ellington’s Sophisticated Ladies in 1982. Payne also starred in productions of Ain’t Misbehavin’ with Della Reese, The Blues in the Night, Jellies Last Jam with Gregory Hines and Savion Glover in the 1990s. Payne’s film appearances include: Private Obsession in 1995; Sprung in 1997; Ragdoll in 1999; The Nutty Professor II: The Klumps in 2000; and Fire and Ice in 2001.

Returning to her jazz roots, Payne later toured with Darlene Love in a critically acclaimed revue entitled Love and Payne.

For a complete biography, visit https://www.fredapayne.com/bio

Note: This show is being sold at full capacity.