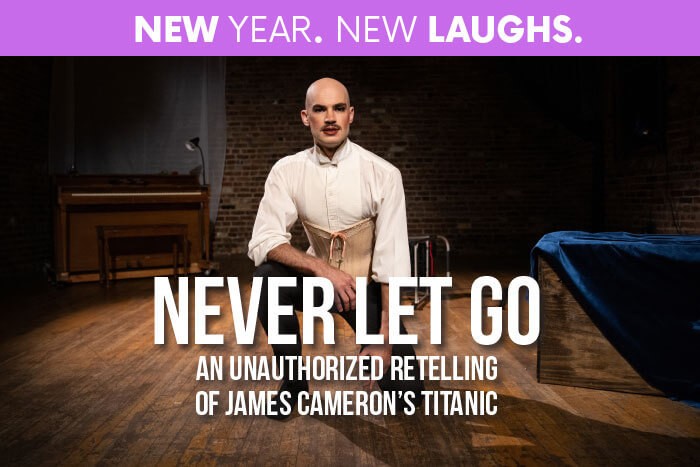 “’Never Let Go’ is a feat of ingenuity that works regardless of whether you have seen the movie.”

This one-man marvel is a Burlesque-style show that hysterically and ingeniously retells James Cameron’s 3-hour-plus blockbuster film as a one-hour play.

(These rescheduled dates are now on sale)

NEVER LET GO is a thrilling and often hilarious one-man show dedicated to the Ship of Dreams. The show takes the three-and-a-half hour epic and packs into just one hour — a surprisingly subversive punch for a project whose source is a 90s Blockbuster film, created by one of Hollywood’s most notorious directors. Kinnan, who grew up worshiping the movie and its iconic cast of characters, plays all of them. As told by Rose, the play takes you on an intimate journey into the fateful romance that is shadowed by one of the most devastating man-made disasters of modern history – the sinking of the Titanic.

Where were you some 20 years ago if you weren’t watching Titanic for the sixth time in its original theatrical release? It’s difficult to remember anything about 1997 other than Celine’s soul-shaking transformative ‘My Heart Will Go On’, isn’t it? Or Leo’s dreamy locks cascading across his flawless brow? Or Kate’s perfectly turn-of-the-century lip-liner? Or Billy Zane’s unapologetic wig line? Love it or hate it, you’d never seen anything like “Titanic.” Now see it in its stirring solo recreation.

MICHAEL KINNAN (Creator/Performer) (he/him) is a producer and director. Michael began his career at the oldest off-Broadway house, The York Theatre NYC, assisting a variety of productions. He then directed new scripts with collaborator Liz Magee in a string of short play festivals garnering the Best Play Grand Prize at the Manhattan Repertory Theatre Riant Festival.  Michael is a former Observer in the SDC Observership Program, assisting the Pioneer Theatre Company production of Bruce Norris’ Clybourne Park (dir. Timothy Douglas). His critically acclaimed retelling of James Cameron’s Titanic, Never Let Go has been shown to sold out audiences since 2017 at the Drama Book Shop, Vital Joint, PosterHouse, and most recently in an extended run at The Brick, where it became a New York Times’ Critics’ Pick. Additional credits include Edward Albee’s The Zoo Story (New York). Michael is also a performance artist known as Mischa Kinx, and has been seen virtually in Pride and Holiday Drag shows nationwide. Michael is a certified Yoga Instructor and Marma Therapist. Upcoming: Never Let Go (Bucks County Playhouse). In Development: Goodbye Horses: Silence of the Lambs Retold.